EVENT RESCHEDULED TO FRIDAY 6TH MAY 2022. Originally Friday 7th May 2021. All original tickets are still valid!

Having recently dropped his brand new album, Shake the Snow Globe, hip hop sensation Russ comes to Mesa Amphitheater on Friday 6th May 2022 (Rescheduled from Friday 7th May 2021) on his Shake the Globe Tour! The "Best on Earth" rapper is riding the waves of his hard-earned success, having landed himself a major co-sign from Rihanna last year with the track! Though no stranger to controversy, Russ is both a prolific spitter and a red hot live act, so make sure you don't miss your chance to catch him with his hotly-anticipated brand new material! 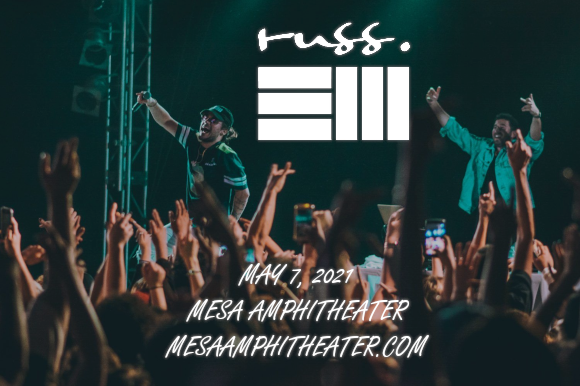 A hip hop lover from an early age, rapper, singer-songwriter and record producer Russ grew up in Georgia and began making beats aged 14, and recorded his first track four years later. After forming the collective Diemon, Russ had his first taste of fame in 2011, when he appeared on MTV alongside Bugus. That December, he began a prolific spell in which he released 11 albums and 87 singles consecutively through SoundCloud over the next three years, and after that, he began releasing a song a week, eventually catching the attention of Capitol Records with his singles "Prosper", "Maybe" and "Lean On You". He signed to Columbia in 2016, releasing his major-label debut, There's Really a Wolf, the following year, debuting at number seven on the US Billboard 200 and number four on the US Top R&B/Hip-Hop Albums charts. He released his follow-up, Zoo, in September 2018, peaking at number four on the Billboard 200.