Texas country favorite Cody Johnson will perform at Mesa Amphitheater on Saturday 26th October 2019 as part of his 2019 tour! The chart-topper, who recently supported Grammy Award-winner Miranda Lambert on her Wildcard Tour, will be playing songs from his most recent album, Ain't Nothin' to It, including his latest hit, "Nothin' on You"! And not only will fans be able to enjoy a headline set from Cady, but they'll also be getting the hand-picked support line-up of The Steel Woods and Harry Luge! 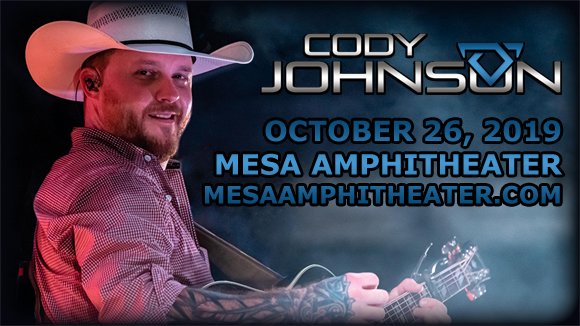 Texan country music singer and songwriter Cody Johnson has been singing and playing guitar since age 12. In 2006, along with his dad Carl and drummer Nathan Reedy, he formed the Cody Johnson Band. The band self-released their debut album, Black and White Label, that year. The group continued to record, grow and change over the years, and in 2009, Johnson released his first professional-quality album, Six Strings One Dream. Two years later, helped in part by the release of his album A Different Day, Johnson won the Texas Regional Music Award for New Male Vocalist of the Year, and left his day job to pursue a full-time music career. Cowboy Like Me, Johnson's fifth studio album, was released in 2014 and served as his breakthrough, debuting at number 25 on the Billboard Top Country Albums chart and number 33 on the Billboard 200. His following album, Gotta Be Me (2016), was even more successful, debuting at number 11 on the Billboard 200 and at number two on the Top Country Albums chart.