With over 85 million albums sold and countless awards and citations attached to their name, TLC is still the best-selling American female group of all time. Their 1994 Diamond-certified album "CrazySexyCool" has just turned 27 years old, hence, a celebration is truly in order. Bone Thugs N' Harmony will join TLC on the 18-date tour which includes a date at the Mesa Amphitheater on Wednesday 6th October 2021. TLC's Rozonda "Chilli" Thomas, states, "I'm so excited for this tour because we've been talking about doing something special for CrazySexyCool for years and FINALLY, we get to do it! This is the album that truly put us on the map and showed the world who we really are. So, this will be quite the celebration!" Party like it's 1994 with TLC! Book your tickets now! 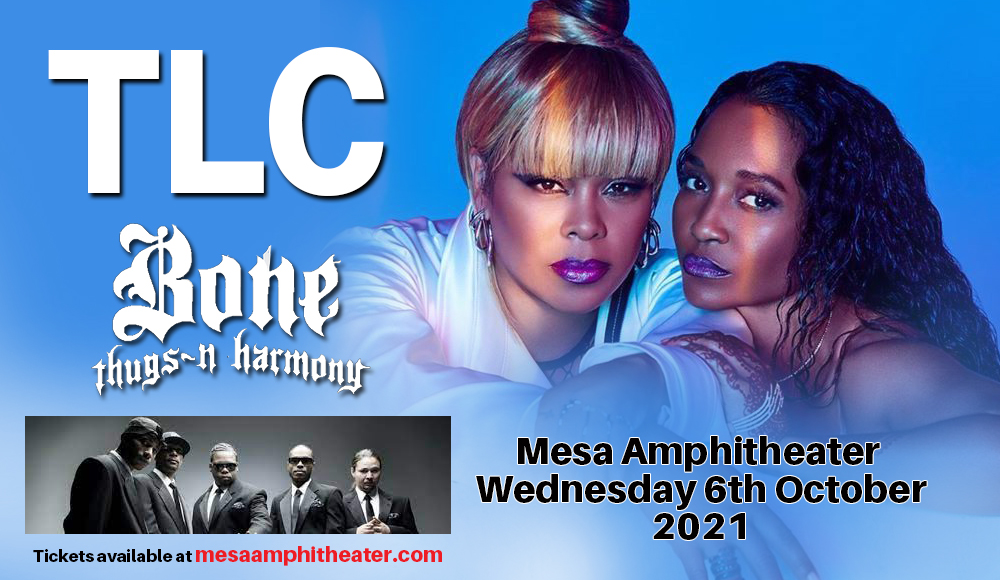 TLC's CrazySexyCool (1994) was a pivotal album for the group, not only in terms of sales but it solidified their stature as an iconic and influential music force. This Diamond-certified album churned out a succession of Billboard Hot 100 hits, namely—"Creep" and "Waterfalls" reached number one, "Red Light Special" peaked number two, and "Diggin' on You" reached number five. " The album also garnered critical acclaim, with Rolling Stone ranking it among the 500 Greatest Albums of All Time. CrazySexyCool also ran away with major awards and citations which include Best R&B Album and Best R&B Performance by a Duo or Group for "Creep" at the 38th Annual Grammy Awards. Billboard also crowned TLC as the Artist of the Year at the 1996 Billboard Music Awards.

David A. Keeps of Rolling Stone explained the impact of TLC:
"TLC's career has been filled with both hits and headlines. The group was one of the few R&B acts to build a strong identity out of its initial success, and they exerted more control over each successive record. Their music – particularly the 11-million-selling CrazySexyCool and the 6-million-selling FanMail, both of which won two Grammys each – set the standard for contemporary R&B. TLC helped to pioneer a deft blend of acoustic and computer sounds that paved the way for groups like Destiny's Child, as did their image as independent women. Whether addressing AIDS in 'Waterfalls' or the struggle for female self-esteem in 'Unpretty', they showed themselves able to take serious issues to the top of the pop charts."

TLC's original line-up consisted of Tionne "T-Boz" Watkins, Rozonda "Chilli" Thomas, and Lisa "Left Eye" Lopes. In 2002, the group saw the untimely demise of Lisa "Left Eye" Lopes in a car crash. T-Boz and Chilli continued to perform as a duo, and in 2017, they released their eponymous fifth album TLC.

TLC plus Bone Thugs N Harmony on stage makes for one explosive hip-hop and RnB night. This is one hot ticket you should be getting as early as now. Don't wait 'til the last minute, book your tickets now!