Bringing the sunshine to Mesa Amphitheater on Friday 10th September 2021 are reggae-tinged punk-rockers Slightly Stoopid as part of their annual summer tour – a tradition that spans 15 years! Serving laid-back, feel-good vibes alongside an eclectic back catalog that was made for skankin' to, the Stoopid boys know how to get a crowd going all night long! They'll be joined by special guest support acts Fortunate Youth, Katastro, and The Elovaters, making the perfect reggae-rock line-up that will have you smiling and grooving from beginning to end! 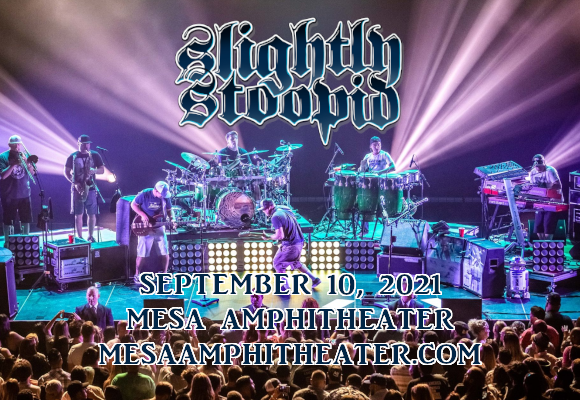 San Diego-based punk-rock reggae band Slightly Stoopid was formed in Ocean Beach in 1994. Not long after the band began, they were discovered by Sublime lead singer Bradley Nowell, who signed them to his Skunk Records label while they were still in high-school. To date, the band has released nine studio albums, with five of them reaching the Top 10 of the US Billboard Independent Albums chart. Their 2005 album, Closer to the Sun, topped the Heatseekers chart and their most recent album, Everyday Life, Everyday People (2018), reached number one on the Reggae Albums chart and featured collaborations with  Italian reggae artist, Alborosie, UB40's Ali Campbell, Chali 2na, Don Carlos (on two tracks), G.Love, and Yellowman.